The History of Kane Photography

I have never given any thought to how my Dad (Ben Kane)  got involved in photography.  Most certainly his interest was keen well before World War II because we have many images he took in the late ’30s and early ‘40s before the war.   I have a photograph made in 1939 with Dad holding an Argus C-3. 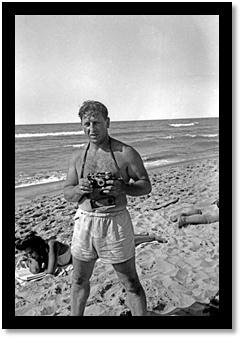 Shooting 35mm before the war was only for the serious photographer.  Most everybody had a camera but it was usually one of the many versions of Kodaks using a variety of roll film.  We too have many images shot in this format.

During the war, film was difficult to obtain and almost everything was rationed.  So, it is difficult to say what if any interest my Dad had in photography from 1942 through mid-1945.  But when the war ended in August 1945 Dad knew he wanted to open a camera store.  I know he had no thoughts about opening another bar-B Que restaurant and he had the cash to start a business requiring inventory like a retail camera store.  I also know he had a couple of friends in the camera business, so it is reasonable to conclude that even during the war his interest in photography was substantial. 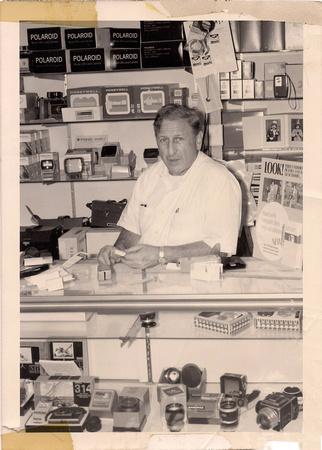 The war ended in August 1945 and by October of that year, he had opened Norshore Camera Company on Howard Street on the north border of Chicago (with Evanston).  The major challenge during those first years was actually getting cameras and film because there were still shortages and most companies were struggling to return to a normal manufacturing economy.

Over the 46 years, my parents were in the retail camera business, they had three locations.  I remember as a ten-year-old working on Sundays in the original location for the four hours the store was open on Sundays.  When Dad moved to a better location, still on Howard Street in 1951 I was working weekends and by 1955 I ran the store for a couple of weeks in the summer when Mom, Dad, and Scott went on vacation.

There is no question that photography was my Dad’s idea and his “pet”.  Mom always did the books and worked behind the counter.  She could put film in most cameras and certainly waited on customers, but she never took any pictures.  I mean she never took any pictures.  I can’t ever remember her even holding a camera or just shooting for fun.  To Bea, the camera store was just a business, not a passion.  There is no doubt in my mind that my parents would have sold the business a decade earlier than they did if the decision was my mother’s.

I am not suggesting she didn’t like the business; she loved it.  But, they stayed in business mainly because my Dad just didn’t want to leave this business he built.  When they finally sold the retail camera store, it was to one of their long-time employees who had actually opened another camera store in a non-competing location.  Dad felt he was turning the business over to someone he could trust. 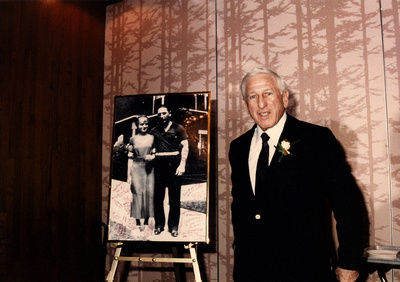